September 26, 2014
We have been a customer of Page One Power for 12 months and after a failure to glean results from the campaign have cancelled the campaign.

Poor results are a common result of business dealings but when a company employs tactics to cover up shortcomings, misrepresent results and fails to take any accountability, then this is blog-worthy.

We have contracted with Page One Power for SEO services including email-based linkbuilding and guest blogging and would not recommend these services to a friend. The relationship spanned 12 months starting September 2013 and was for a 5-figure sum of money.

One the P1P blog, in the few posts where they discuss strategy, guest blogging is a major component of their thinking. Of course Google's Matt Cutts discusses the fall of guest blogging as an SEO strategy in his blog. But since this is a low-cost, low-quality, high-visibility link, P1P project managers defended the practice with (emphasis mine):


Yeah Will we have seen this. It’s nothing new, Matt has been talking like this for a year. If you look at it very close, especially his added notes at the end and his replies to peoples comments you will see that “guest posting” is not going away. This to us, seems to be more of strong threat to say, “Stop doing spammy stuff” which we all agree. To me this gives me all the more confidence in what we do. We do real outreach with real people contacting relevant sites, writing real articles that make sense for both parties.

Of course 99% of guest blogging with hyperlinks is spammy, including the work of P1P. All our articles were written by invented people with fake personas. These fake people also failed to disclose their relationship with our company. In legitimate publications (the ones you and I actually read) this would be unacceptable and considered a failure of journalistic integrity. In other words, this is the exact stuff Google is targeting. I was also given the following excuse:

Guest Posting is part of the internet world. Everyone from New York Times to Moz does this. Is Google going to penalize New York Times?

Excuses are not necessary, only results matter, I have typed in [new york news], [news papers from new york], [us newspapers], and [news] into Google using my large 21” iMac. I did not see New York Times mentioned anywhere above the fold on any of these pages. And these are just the first queries that came to mind.

Since you are paying by the hour, results are glossed over. You can quickly see this by viewing their packages page which states "We sell hourly packages because we can’t promise a certain number of links per month." They fail to mention typical customer results. Our results were 24 normal email-based outreach links created over 12 months. Several of these link existed (and are visible on the Wayback Machine) before the P1P engagement. In other words, they took credit for others' work.

P1P has implemented several other campaigns types during our work together. Wikipedia links which are quickly reverted (for anti-spam policy) are still reported for credit. Lastly, a badging campaign ("You are one of our top 10 favorite websites, link to me!") took several months to execute and produced less results than we achieved in house last time using interns. On our website we will post links to our chosen sites and hope they link to us. P1P has provided me with text to publish which was already published elsewhere on the internet (big no-no!) and also this ridiculous piece below: 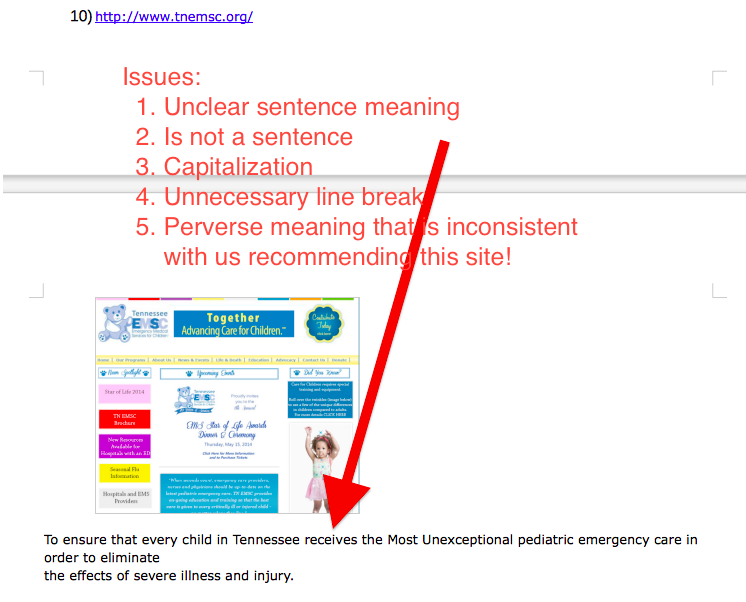 The worst part is how P1P fails to take any accountability in their projects and in resolving issues. When I started with P1P we used Google Docs to manage the account, set a target of 10 links per month, and I had visibility to the whole team. Also, I promised to double the budget when the target is met, and to continue doubling. We have failed to meet the target in every month of the campaign and not once has anyone from P1P contacted me to note that the target was unreasonable nor that they were failing.

To reduce accountability further, P1P has reorganized its project teams to delegate contact with clients through a separate Project Manager for client interaction. Also, the detailed Google Docs including project goals has been replaced with Linktracker, an internal reporting tool that only provides data. The links acquired data and outreach information they provide is detailed and (if you ignore credit taken unduly) useful.

A Director of Operations at P1P missed appointments three times when discussing project accountability and failed to indicate that other Project Managers at P1P would produce any different results, noting only "... we certainly had hopes to bring the results you desired.  This was a difficult project and we are clearly not on the same page."